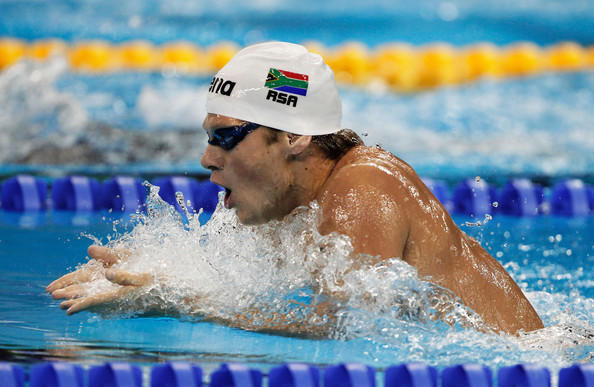 THE final day of action at the South African National Championships provide a long course African record in the men's 400 IM.

After clearing the world record in the men's 50 breast semifinals with a 27.06, Cameron van der Burgh settled for the win with a 27.30. Donaven van der Merwe placed second in 28.36, while William Diering took third in 28.43.

DOUBLE short course breaststroke world record holder Cameron van der Burgh heads a short-list of top South African swimmers who are bidding to cash in on the opening leg of the lucrative Fina/Arena Swimming World Cup that gets under way at the King’s Park Aquatic Centre in Durban tomorrow.

Other South African stars looking to cash in on the $1 500 (R11 000), $1 000 and $500 on over for the first three places respectively in each event are Roland Schoeman, Kathryn Meaklim, Gerhard Zandberg, Mandy Loots, Darian Townsend, Riaan Schoeman, Charl van Zyl and Chad le Clos. All told there are entries from 115 South African swimmers and from 58 foreigners.

It will be recalled that Van der Burgh improved on both his world breaststroke records at the Telkom SA Short Course Championships in Pietermaritzburg last August, posting 25.43sec for the 50m event and 55.99 for the 100m.

The like able Tshwane-based swimmer topped the men’s overall rankings in last year’s World Cup series, for which he received a purse of $100 000, a feat he would love to repeat in this year’s ve-event series.

With $10 000 also on oer for breaking a world record during the series, Van der Burgh and the rest of the South African squad will be highly motivated to outperform the strong international challenge.

Guehrer has entered the 50m buttery as world champion, the 50m freestyle and the 50m backstroke. Jones, who is 24, is no stranger to setting world marks and will be on the starting blocks in the 50m, 100m and 200m women’s breaststroke races.

As the 100m breaststroke world short course record holder in 1:03.72, she will be aiming to edge Hardy at this distance in what could be one of the highlights over the two days of the World Cup.

Hardy is the world short course record holder in the 50m breaststroke in 29.58, where she and Jones again come face to face.

The morning qualifying sessions tomorrow and on Saturday are from 9.30am with the nals each evening from 5.30pm. Entry is free. Following the Durban leg of the series, the Fina/Arena Swimming World Cup moves to Moscow (November 6-7), Stockholm (November 10-11), Berlin (November 14-15) and Singapore (November 21-22).

Meanwhile, six of the country’s top swimmers are in line for the senior swimmer of the year title which will be presented along with a number of other awards at Swimming South Africa’s annual awards ceremony to be held at the Elangeni hotel in Durban tonight.

In contention for the prestigious award, which recognises performances achieved during the period May 1 2008 to April 30 2009, are breaststroke world record-holder Van der Burgh, Jean Basson, Schoeman, Townsend, Sebastien Rousseau and Meaklim.