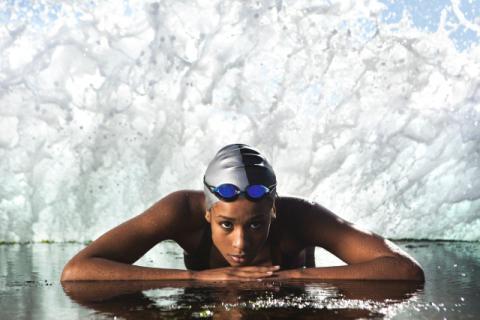 OLYMPIAN Riaan Schoeman produced the swim of the night when he raced to his first Commonwealth Games qualifying time on the fourth day of the Telkom South African Swimming Championships at the King’s Park pool in Durban last night.

Schoeman was one of four qualifiers in an action-packed evening, but the diminutive Durbanite proved his versatility and domination of the men’s 400 m individual medley after clocking an outstanding 4:14,80 — a personal best time without the use of the “fast suits”.

Schoeman’s time places him second in the world rankings at this early stage of the year, behind Roberto Pavoni of Great Britain, who has done a 4:14,55. Chad le Clos, who qualified in Monday’s opening session in the 200 m butterfly, was second in 4:19,14 and Jonathan Hill third a distance back in 4:28,50.

Georgia-based Wendy Trott came so close to her national record in the women’s 800 m freestyle, clocking an encouraging 8:27,11 to secure her second qualifying time within 36 hours. “I am extremely happy with my time at this stage, but would have liked to have gone under 8:26,” said the Capetonian. “But I still have the 400 m freestyle to come, so I am hoping for a better result there.”

Du Toit’s time was over two seconds under her own world record in her disability category. She had earlier also achieved a qualifying time for the Commonwealth Games in the 100 m butterfly.

A smiling Chanelle van Wyk can go into tonight’s women’s 50 m backstroke in a more relaxed mood after she qualified with a fast 29,05 sec.

The glamour event of the evening, the men’s 100m freestyle, lived up to expectations and was closely contested from the start, despite the absence of the injured title holder, Lyndon Ferns.

As expected, Olympian Roland Schoeman powered away on the first 50 m from the chasing pack of Gideon Louw, Graeme Moore and Darian Townsend. Louw did not get the best of the start and had a long way to catch up.

Schoeman set a fast pace as Louw caught Moore and Townsend at the turn and set about catching Schoeman.

Charl van Zyl was only 0,06 second outside the qualifying time in the semi-final of the 100 m backstroke, clocking 55,14. Van Zyl just missed out on qualifying for the 200 m backstroke on Wednesday, and is determined he will achieve his target in tonight’s 100 m final.

While Townsend is the favourite to win tonight’s 100 m butterfly final after an encouraging 53,88 dash, he may scratch this final in favour of the 200 m individual medley, which is his favourite event.

Mandy Loots, the seasoned 32-year-old who is enjoying her 18th appearance at the senior nationals, led the way home again in the women’s 100 m butterfly final.

Although her winning time of 59,71 was 0,36 second outside the qualifying time for the

Commonwealth Games, she was the only one to break the one-minute barrier with Vanessa Mohr second in 1:02,18 and Bianca Meyer third in 1:02,68.

Loots was unfazed at not having qualified and said optimistically: “I’ve still got the 200 m back and 200 m fly ahead of me, so I still have a lot to look forward to.

“It has been a bit of a change swimming without the ‘fast suits’, but I am enjoying the normality of it all.”

Ronwyn Roper topped the list of qualifiers in the women’s semi-finals of the 100 m breaststroke in 1:12,39 and Karen Prinsloo was the fastest qualifier in the 50 m freestyle in 26,28 sec, but both will have to go a lot faster in tonight’s finals to qualify.

OLYMPIAN Neil Versfeld swam one of his best races ever on the final day of the Telkom South African Swimming Championships that ended in Durban on Saturday night.

Van der Burgh set the pace over the first 100 metres, turning 1:02.79 with Versfeld a second behind. But then at 125 metres, everything changed for Van der Burgh as Versfeld took the lead. Not only did Versfeld make up that one second deficit at the 100 metres, but he opened a four-second victory over Van der Burgh and went on to clock two seconds under the 2:13.69 Games qualifying time.

It's been a long week waiting for this race but it has been well worth it, qualifying for the New Delhi team,” said Versfeld who competed at the last Commonwealth Games in Melbourne in 2006 where he came sixth in 2:14.79.

Two unfamiliar names emerged from the men’s 1 500m freestyle after the strongest line-up ever assembled for the final.

Heerden Herman raced to a brilliant win in a Commonwealth Games QT of 15:06.75 and pulled Mark Randall to his QT for the second place in 15:09.75. This is the first time ever that there have been two qualifiers in a 1500m event.

It was a determined Roland Schoeman who got the evening off to a flying start in the men’s 50m freestyle where the comfortable pace he is known for, was fast returning without the advantage of‘fast suits’.

This time he equalled his best prior to the 2 000 Olympic Games in Sydney, his debut Olympics, clocking an amazing 22,04sec.

Schoeman pulled Gideon Louw through to another qualifying time as well where he “was also pleased with his result”, clocking 22,28sec.

Wendy Trott, who qualified for the Games in both the 400m and 800m freestyle during the week, made an appearance in an unfamiliar event for her, the 400m IM.

”Without aiming at any times, I am rather surprised that I managed to come so close to qualifying,” said the University of Georgia student.

For veteran Mandy Loots, it was the last throw of the dice when she tackled the 200m butterfly in order to achieve that elusive QT. The 32-year-old raced to her fourth title of the championships to clock 2:12,03 - just 1,19sec outside the QT.

”It is really difficult to swim out there on your own trying to get the qualifying time,” said Loots who thrives on racing off a swimmer and really finishing a lot faster than she was able to on Saturday.

Swimming in her 18th national championships, Loots summed it up for all swimmers who did not achieve their goals during the week.

“I’ve learned over the many years I have been swimming that if you don’t make it for one thing you keep on trying for the next.”

In all, 14 qualifiers managed to achieve the times, 11 males and three female, including Natalie du Toit who qualified to swim in the disabled category after breaking two world disabled records.

However, with the relay teams still to select, this may open the door for at least two more swimmers to make it to New Delhi. But the lack of women qualifiers should tell the selectors that they need to come up with a contingency plan to get more women prepared for this level of competition before the same happens in 2012. A fewswimmers come to mind in Leone Vorster and the likes of Jessica Pengelly and Kathryn Meaklim who simply had an off-week and should not be discarded at this stage.

Among the swimmers with disabilities, another locally trained swimmer, David Coates, managed a bronze medal in the 200m IM event in the S14 category.

DOUBLE Olympian Darian Townsend arrived back in the City yesterday to take part in the Telkom South African Short Course Swimming Championships that get under way at the GC Jollie swimming pool in Pietermaritzburg tomorrow.

Townsend will have a busy weekend where he is likely to feature prominently among a strong group of male contenders that include Olympians Roland Schoeman, Cameron van

The men’s swimming will give spectators plenty to get excited about, especially in the 50 m sprint events that eliminate swimmers until the nal is contested by just two swimmers. Last year a number of world records fell to Schoeman and Van der Burgh, but they were in the now banned swimsuits. There will be keen interest to see how close the swimmers can get to their times last year just wearing what is termed ‘jammers’. All eyes will also be on the times getting recorded at the U.S. Championships.

The women’s events look set to be a challenge between a few of South Africa’s most versatile swimmers in veteran Mandy Loots, Kathryn Meaklim and Jessica Pengelly, while the sprinters who should feature are Karen Prinsloo and Chanelle van Wyk. From the local side, Ronwyn Roper and Bianca Meyer will be hoping to get amongst the medals as well. In the distance events, Wendy Trott is likely to continue her domination while Leone Vorster will be hoping to challenge over the 100 m and 200 m freestyle events. Among the younger ones to watch will be Jessica AshleyCooper and Vanessa Mohr.

CASABLANCA, Morocco, September 19. IN the final day of pool swimming at the African Long Course Championships, South Africa's Mandy Loots doubled up with a pair of meet records.