Tell me the REAL Reason why you watch Swimming 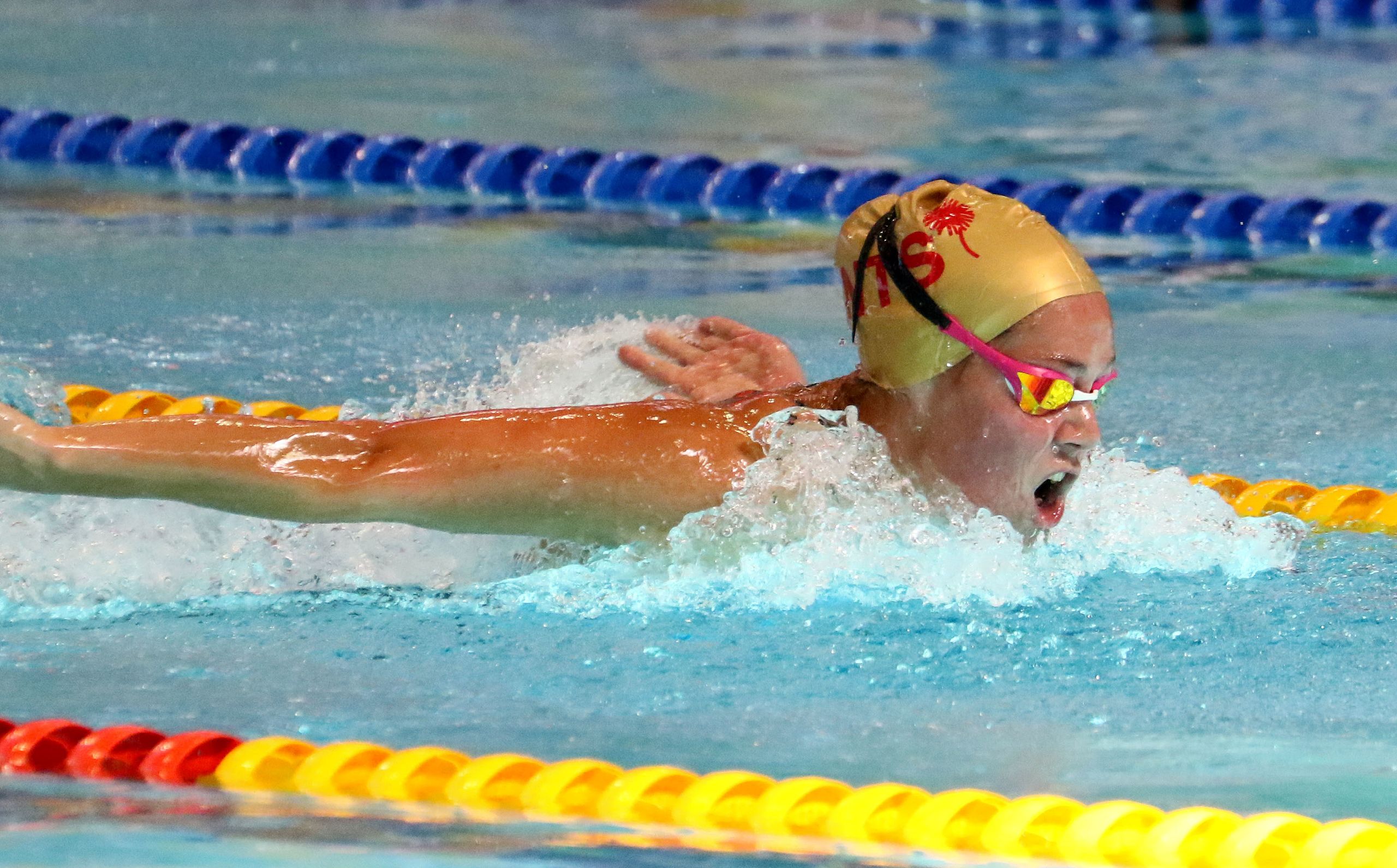 The South African swim stars and a rising pool of talent that competed at the recent Zone 6 as well as Zone 3 & 4 Championships will be out in search of top honors when the inaugural SA International Invitational Swimming meet takes place in Port Elizabeth on 29 and 30 January 2011.

Natalie du Toit’s extraordinary performance during 2010 is sure to continue in 2011 when she competes in the 400 and 800m freestyle races.

Du Toit broke 8 World Records at the Telkom SA Short Course Championships that took place in Pietermaritzburg last year. She maintained her “golden girl” status when she achieved three gold medals at the Commonwealth Games and won two gold and a bronze (SA Record) at the IPC Swimming World Championships in Einhoven.

Swimming in the 50, 100 and 200m butterfly, the young and talented Vanessa Mohr will also be on the track for medals in the friendly city. Mohr recently took the gold in the 100m butterfly and silver in the 50m butterfly at the 10th Senior African Swimming Championships in Morocco.

Mohr will be up against veteran swimmer Mandy Loots in the 50, 100 and 200m butterfly. Loots, who claimed three gold medals with Championship Records and a silver at the 10th Senior African Swimming Championships as well as two bronze medals (200m butterfly) from the FINA/Arena Swimming World Cup in Berlin and Moscow, will also be swimming in the 200m individual medley.

Chad le Clos will be swimming in the 100 and 200m butterfly, 200 and 400m freestyle as well as the 200 and 400m individual medley. Le Clos had a busy 2010 as he claimed gold and silver medals at the Youth Olympic Games in August, followed by two gold medals at the Commonwealth Games and concluded the year with a gold medal at the FINA World Short Course Championships. The 18 year old is ranked 8th in the 400m IM and 15th in the 200m fly.

Gideon Louw will be competing in the 50 and 100m freestyle. Louw is currently ranked 13th in the world in the 50m freestyle.

Van der Burgh added another gold medal to his name in the 100m breaststroke and a silver in the 50m breaststroke at the FINA World Short Course Championships which took place in Dubai in December 2010.

The hosting of the SA International Invitational Swimming Meet in Port Elizabeth is made possible through the support of loyal swimming partner in the form of the National Lotteries Distribution Trust Fund. Courtesy of Swimming South Africa, the prize money stakes are high with a gold medal worth US$1500, a silver medal at US$1000 and a bronze medal worth US$500. The Best Performance, both male and female, based on their FINA points will each receive US$10000.

The morning session of the swimming will take place at the Newton Park Swimming Pool on January 29-30 from 09h30 with the evening programme beginning at 17h30. Entrance to watch the swimming is free of charge.

THE big names continued to dominate the penultimate night of the Telkom SA National championships in Port Elizabeth last night.

In the opening event the charismatic Chad le Clos added the 100m gold to his earlier 200m butterfly gold and seems set for the World Champs in Shanghai while Cameron van den Burgh treated the enthusiastic crowd to a world class 50m breaststroke performance, winning in a WQA of 27.24.

Charl Crous won the 100m backstroke in a WQA 55.03, with Gerhard Zandberg, who made an early move, unable to sustain his pace over the last 20 metres. He finished second in 55.58.

Karin Prinsloo showed nice speed in the final 20m of the 50m freestyle to edge out Natalie Elphink and Trudi Maree into second and third place with the 200m backstroke being an equally exciting race. Jessica Ashley-Cooper led for the first 150m of the race but was overhauled in the final length. She was beaten into third place with Natasha Vosloo and Leone Vorster taking gold and silver respectively. Suzaan van Biljon took gold in the 100m breaststroke.

EP’s Michael Barnes has all the potential to reach Olympic standard. She convincingly won the 200m backstroke youth final in 2.20 which would have placed her fourth in the senior final.

Tonight’s programme, the final night of the championships, will be full of interest. The 50m freestyle will see SA swimming icon Roland Schoeman, once the fastest man in the world, taking on the young brigade of Gideon Louw, Graeme Moore, Brad Tandy and Craig Jorgens.

Swimming 'rotten to the core'

Ready and raring to go is the motto of the South African swimming team at the 14th Fina World Championships here, though the possible embarrassment of a Swimming SA (SSA) internal audit hangs over their achievements in the pool.

Martie Belotti, an executive assistant to CEO Shaun Adriaanse, quit this month, but her letter of resignation was sent to a few more people than just her bosses. In it, she alleges the organisation is rotten from top to bottom.

She alleges that fraud, corruption, misuse of funds and financial mismanagement is happening at SSA. The matter is being treated as urgent and will be investigated, but no answers are expected before the tournament ends.

Meanwhile, the old man of swimming, Roland Schoeman, will be first up this morning when he starts with the 50m butterfly.

Schoeman, who has been on the podium far more times than he can remember, did not have the greatest time at the world championships in the past two years. First there was Rome, where he did not get a medal, followed by the 25m short-course championships in Dubai, where he suffered a chest infection.

Being ranked sixth in the world in the event with 23.43sec should give him confidence - though he was not showing anything of the sort.

"I really can't say what is going to happen, especially after the previous championships. I am happy with my training and feeling good. I am not putting myself under any other pressure," said Schoeman.

Cielo Cesar, the Brazilian swimmer who was cleared of a doping offence by his federation several weeks ago, swam the fastest time this season of 22.98. But the buzz around the pool is that he shouldn't really be in contention.

Some swimmers use steroids and afterwards drink a masking agent such as a diuretic to see to it that they come away with merely a warning.

Schoeman will have a busy day as the famous "Awesome Foursome" try to emulate the group that won gold at the Olympic Games in Greece in 2004. This time, the possible team is Schoeman, Darian Townsend, Graeme Moore and Gideon Louw.

South Africa's triple world champion, Cameron van der Burgh, will also be in action today, in the 100m breaststroke. With a bronze in Rome, he is eager to get his hands on gold this time. Although he managed only third in Rome, he clinched the 50m breaststroke in world record time.

"I have been concentrating a little more on the 100m as the 50m is not an Olympic event, so we will see how it goes. I am swimming the first two days of the week and I always enjoy that," he said.

Meanwhile, earlier in the week, Natalie du Toit was disappointed when she could only manage 39th place in the 10km open-water swim with a time of 2:08.27.

This means lots of hard work as she was trying to qualify for the Olympics here. Her dream is deferred for now. 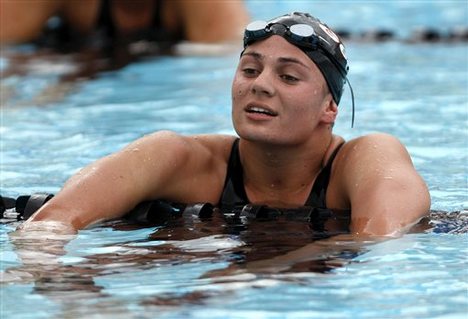 The South African swimming team continued to impress on day three of the 14th Fina World Championships swimming programme in Shanghai, China, on Tuesday. With the fastest semifinal time of 26.90, Cameron van der Burgh successfully qualified for the final of his speciality event, the 50m breaststroke. Van der Burgh won his semifinal ahead of Brazil's Felipe da Silva in 26.95 and Norway's Alexander dale Oen in 27.33. The final of the event will be held on Wednesday.

"I just want to do enough to make the final," Van der Burgh said before he warmed up. Well, it took just 20 strokes across the men's 50m breaststroke for the World Record holder to clock up a world best this year of 26.90sec and advance to the final in the top spot.

Nineteen-year-old Chad le Clos, who was recently chosen by Omega as one of their global brand ambassadors, also secured his place in the 200m butterfly final on Wednesday after a fast finish in the semifinals. Le Clos clocked 1:55.56 to finish in seventh position.

Earlier on in the day, Sebastien Rousseau was one spot short of qualifying for the 200m butterfly semifinals when he ended in 17th place with a time of 1:57.15. Karin Prinsloo finished 25th in the 200m freestyle, clocking a personal best time of 1:59.52. Prinsloo will also be in action in the 50m backstroke on Wednesday.

Day four of the competition will see Gideon Louw and Graeme Moore take to the water in the 100m freestyle while Darian Townsend will swim in the 200m individual medley race.

The final water polo match for South Africa saw the men's side going down to China 9-4, which placed the team in the 16th position overall.