Several factors influence the aquatic sports culture of a society. These include the social norms of the ruling class (who decide where to spend public money) and the type of places and facilities available. The location, construction and maintenance of facilities is linked to the cultural norms of a society, while the moral norms of a society dictate how it views sports and how much of the communal resource a society devotes to particular activities.

Click here to read an article of swimming and culture.

In southern Africa these norms were expressed by the Europeans by introducing aquatic sports in the oceans and their beaches, constructed tidal pools, the rivers, and dams - and later in swimming pools.

The earliest swimming pools in South Africa were probably no more than tidal pools built into the rocks along the beaches around the Cape Peninsula, created by the Europeans as recreational facilities.

Aquatic carnivals were popular events attended by the highest levels of local society, sometimes held in the flooded dry dock of Cape Town harbour. Dams, rivers, harbours, beaches swimming pools were also used for aquatic sports events until the use of outdoor pools became the norm for swimming races.

Betting has always been a part of English society. Gambling on the outcome of a sporting event was also an important motivator for the staging of races. The British Parliament created the  1854 Gambling Act to control betting in England, and they brought their betting culture with them to South Africa.  Swimming races and other sporting events - like the Robben Island race of 1926 - were staged for this purpose.

Good health, hygiene, and bathing are fundamental elements of any high functioning society. When the Roman Empire began to contract, its bathhouses fell into ruin, because the society that replaced it were not high functioning. It took almost 1500 years of development for the English to build their own baths, when the first indoor swimming pool in England, St George's Baths was opened to the public in 1828. In 1976 the Portuguese abandoned a 500-year-old colonial empire in Africa - complete with swimming pools and 10-meter diving platforms. Today most of those facilities also lie in ruins.

Below is an article from the London Times of 28 July 1869 - referring to a floating swimming pool in Table Bay which had survived the Great Gale of 1865. Unfortunately, nothing more is known about this facility at present.

In 1443 a Portuguese slave trader Álvaro Fernandes, tried to capture some locals off the coast of Dakar in North Africa, who had approached their ship in canoes. When attacked, the locals 'dived like cormorants' to evade capture. In southern Africa, there is no evidence of canoes or any such diving capabilities amongst the pre-European inhabitants. The first 'swimmers' in southern Africa were therefore most probably the Portuguese crew of Bartholomeu Diaz, who landed at Mossel Bay on 3 February 1488, where the Hartenbos river lagoon was most likely a good place for a bath. In Europe, the Black Plague of the 1300s had created a perception that swimming 'opens the pores and allowed pestiferous vapours' to enter the body and cause immediate death, so those sailors were probably not very good swimmers. The early Dutch and French settlers at the Cape were most likely not inclined to spend a lot of time swimming, and only in the 19th century did swimming become an accepted activity in European society. In England, swimming emerged as a competitive recreational activity in the 1830s in England, often associated with betting. This is what the British brought to southern Africa.

South Africa has complicated geography, which has a direct bearing on the history of aquatic sports development in the country. The major features include the warm Indian Ocean (east coast) and cold Atlantic Ocean (west coast), as well as a mountain range - known as the Escarpment - that is the edge of the central plateau that covers most of the interior of the country. It runs along the coast from the mouth of the Orange River to the Eastern Transvaal. The central plateau is divided between the semi-arid Karoo in the west to the wetter Highveld in the east of the country. The escarpment inhibits rainfall in the interior, so few major rivers exist on the plateau, while the coastal plain has numerous rivers, that often created deep gorges like the Bloukrans.

Between the Escarpment and the coast, from Cape Town to Port Elizabeth, lies the parallel ranges of the Cape Fold Mountains. The rivers flowing down from the Escarpment created deep gorges along the coast - the Storms , Gouritz and Blouberg, while others like Touws, Knysna and Keurbooms created large estuaries and lagoons. The warm waters of the Indian Ocean create enough rainfall to sustain the impenetrable Knysna forests, so travellers between the cities were forced to cross over the mountain ranges for a journey to the Eastern Cape.

As a result, few towns were developed along the Cape coast, and the resort nature of the coastal towns resulted small numbers of permanent residents. The great majority of coastal towns started as a mere collection of houses built far from any roads and used only during the holidays. North east beyond Port Elizabeth the coastal region between the Escarpment and the coast widens into the Transkei and then the Natal Midlands. The coast of Natal south of Durban is littered with resort towns like Amanzintoti, Margate and Scottborough, each with a tidal pool. They were popular destinations for Transvaalers and Free-Staters who traditionally came for their Christmas holidays.

The establishment of town in South African invariably included constructing sports facilities – including outdoor, unheated swimming pools. Each dorpie in the platteland had its own pool, although not Olympic size, which was used as a community pool and by local schools. The period following the ANC takeover of most municipalities after 1994 has seen many of these pools closed and abandoned, while a few high-profile facilities, like Kings Park in Durban, have been upgraded. This reflects a change in societal norms, as well as the competence of the current management, as countries in southern Africa devolve from High Functioning to third world and even failed states.

Early swimming pools built in South Africa were indoor structures, following the English design. They were often privately-owned enterprises, like the Camps Bay pool  built in 1904, and the Arthur Nathan pool of 1893 in Bloemfontein.

The perception of  a 'sunny South Africa' belies the fact that most of the interior beyond the fold mountains of the escarpment is over 1700m above sea level (Johannesburg - 1753m), where temperatures drop below freezing in winter, making unheated outdoor pools too cold for swimming for at least 6 months of the year. Suitable bodies of water for swimming were, and still are, in short supply. They can be divided between the natural - oceans, rivers and dams, and manufactured swimming pools. Recreational swimming was done in tidal pools, which were constructed in the rocks along the coast, predominantly near Cape Town and along the Natal south coast. Holidaymakers built them for safe swimming along the rugged coast, where swimming in the surf was dangerous.

As swimming became a competitive sport, and before swimming pools were built, events were held along the coast of False Bay from Muizenberg to Fish Hoek for the Gentry Cup race, in Cape Town dry dock and off the harbour pier, seen below is the 1926 Gordons Swimming club 2-mile race. 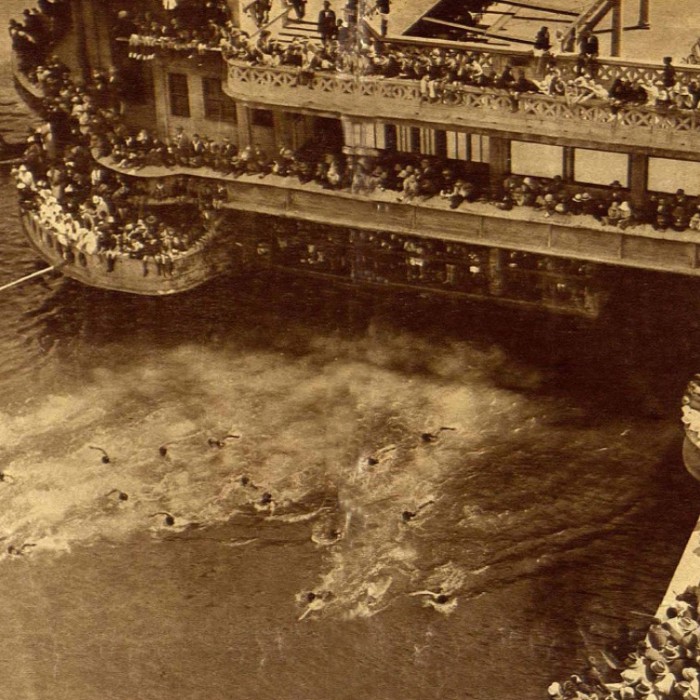 The rugged coastline is ideal for building tidal swimming pools. Many of South Africa's iconic swimming baths were originally built at tidal pools. These include the Sea Point pool, that was built in 1887, McArthur’s Baths in Port Elizabeth, the Rachael Finlayson pool in Durban and the Orient baths in East London. Today there are many tidal pools along the coast of South Africa, like the Dalebrook pool in False Bay below.

Besides swimming pools, swimmers often used rivers, dams, and the sea. During her visit in 1928, British swimmer Mercedes Gleitze swam in the Swartkops river near Port Elizabeth, the Buffalo in East London, the Modder in Bloemfontein, as well as Germiston Lake and Hartbeespoortdam. The Redhouse River Mile in Port Elizabeth  has been held since 1928, although the Buffalo River Mile in east London has not continued. The most well-known swim in South Africa is the Robben Island crossing - while the world's largest open water race is the Midmar Dam Mile held in the Natal Midlands. Today there are many open water races held around the country.

Most municipalities constructed pools, such as the 1898 saltwater pool at Humewood beach in Port Elizabeth. Platteland communities built pools near the centre of their towns, and later, as part of the town sports grounds on the outskirts of each dorp.

In Rhodesia they built pools in their towns as at the schools, while the Portuguese in Mozambique and Angola usually provided swimming pools in their town and mining villages. In German South West Africa, which came under South African control after 1919, there were few swimming pools outside of the capital Windhoek. The most notable pools in South West was the Olympic pool with a sliding roof in Swakopmund - which no longer exists.

A typical South African dorp swembad is the unheated Worcester Municipal pool below, complete with diving boards - when those mountains are covered in snow, the water would not be too inviting! See the map for the location of the swimming pools. 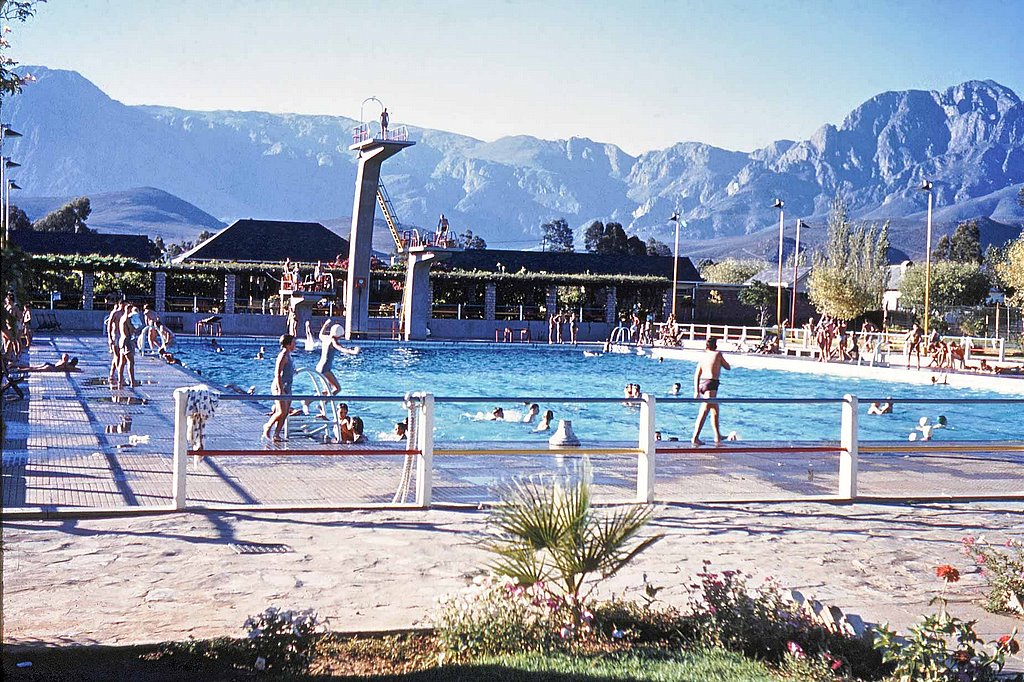 During the 1950s and 60s the South African government and local municipalities had a policy to build swimming pools in each town, and today pools are again being built. These are mainly indoor pools for schools, to allow year-round sports activities like water polo. Unfortunately, in the post-1994 era maintenance of municipal swimming pools is not a priority, and many of these pools have become derelict dead pools.

In the post-isolation era the landscape has changed considerably. Between 2002 and 2007 FINA used the new King's Park pool in Durban to host FINA World Cup events (below), but since then many municipal swimming pools have been also abandoned while private clubs like Virgin Active have built 25m indoor pools at their numerous health clubs throughout the country. Many schools have developed their own facilities to accommodate the massive new interest in water polo as a team sport. Open water races have proliferated around the country, to add to the venerable Redhouse River Mile and the famous Midmar Mile.

1895 - Swimmers of the Redhouse Swimming Club