Every time I dig up stuff from my swimming years, it strikes me as a bygone era in more ways than just the timeline. We used to have international teams touring.....W.Germans, Canadians and it was great to be able to swim against them and see how we rated against some of the top swimmers in the world....we did ok!

During those years, age group swimming and interprovincial competition in addition to SA Champs kept us motivated with goals to train for and well-known opponents to compete against.

Not forgetting the lively competition at schools level......regular inter-school galas during the school term, culminating in the annual SA Schools competition which for some of us, like myself, was the first time we had traveled to represent our home province at SA Schools. My first was in PE in 1964 and I can recall the team sailed down from Durban on one of the well-known lines at the time after which we flew home, both firsts for me on an ocean liner and an airplane! I don’t believe the youngsters are as lucky today. 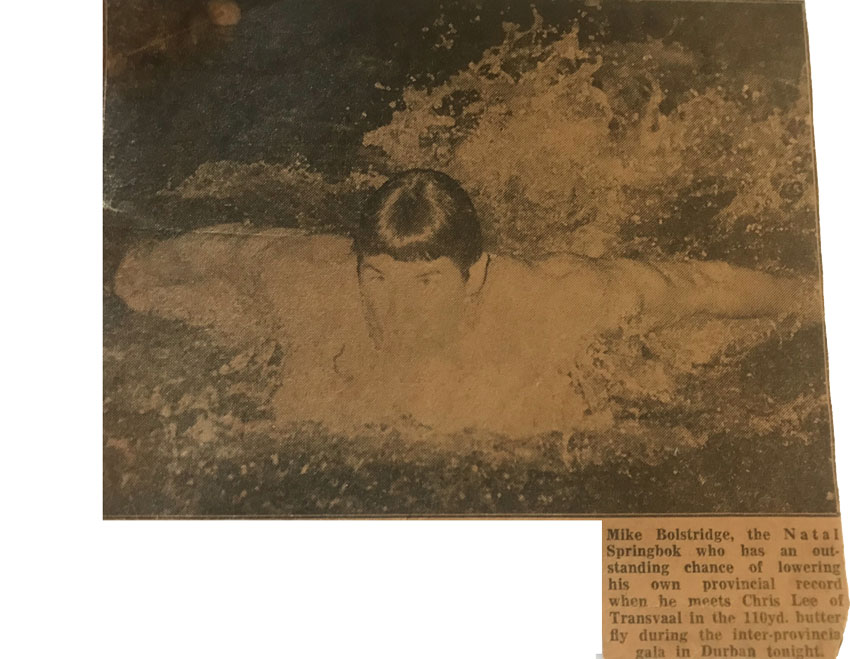 My earliest memories of learning to swim are somewhat hazy, but I recall bobbing around in the shallow end of the Tessorerie swimming pool which was built in the mid 1950’s in our Glenwood, Durban neighbourhood. 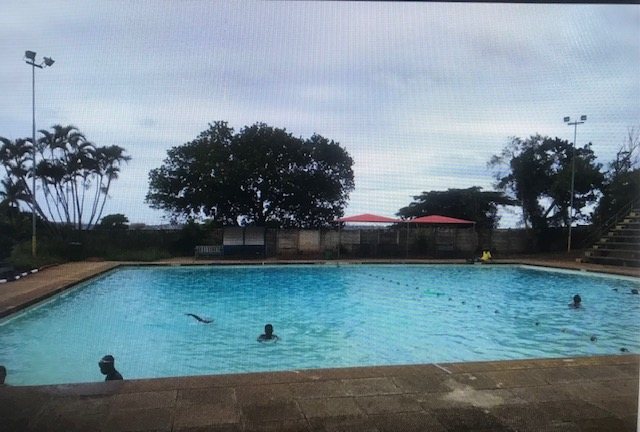 I must have been about 6 or 7 years old. Gradually as confidence grew, the bobbing graduated to brief underwater escapades and above water splashing. From this sketchy beginning, I taught myself a few rudimentary strokes to move forward. I seem to recall setting myself a goal to swim across the width of the shallow end (25 yards) so I could stop and stand if I got tired. Success came eventually and from there, I started to set targets to swim more than one width. Of course, like all kids, learning to swim wasn’t easy and did not come naturally and an aversion to putting one’s face in the water and blowing bubbles to breathe out was a huge obstacle to overcome, but spending time under water searching for coins and stones on the bottom of the shallow end of the pool helped in overcoming this fear. Once the coordination of breathing out with ones face in the water, together with arm strokes was accomplished, a flat body position (as opposed to head up to breathe) made swimming so much easier. Then the longer distances of more than one width of the pool became possible and satisfying as these small goals were achieved.

Skipping ahead some years, the next important step for me was joining the Tech ASC which I heard about from friends at school who were already members. The club had club nights on a Friday evening and my friends had signed up, so I went down with my parents and signed up too. I hasten to say that my parents were wonderful in supporting and encouraging me every step of the way throughout my swimming career. They were a great motivational influence over the years.

I was assigned to a class with a coach (one of the older experienced swimmers we all looked up to) and Friday club nights became a fixture in our family. It was at these club nights I met other good swimmers, the van Renen family (Owen and two older sisters, Merle and Joyce), Allen Morrison, Brenda Jackson and others who were all much better swimmers than I was and were already in the highest class under the watchful eye of club coach, Alex Bulley. I was determined to progress sufficiently to be able to join the cool group of elite club swimmers in Mr Bulley’s group, so tried my best every club night to improve and impress the class coach in order to be promoted to the next class. I was eventually successful and joined the elite group which trained regularly during the week with Mr Bulley who was revered, respected and much loved by every one of us in the squad. In this squad environment and with regular training by an expert coach, I improved in leaps and bounds and by the time I was ready to leave junior or primary school as it was called in those days, I was one of the best swimmers in the school and won trophies for both swimming and diving. 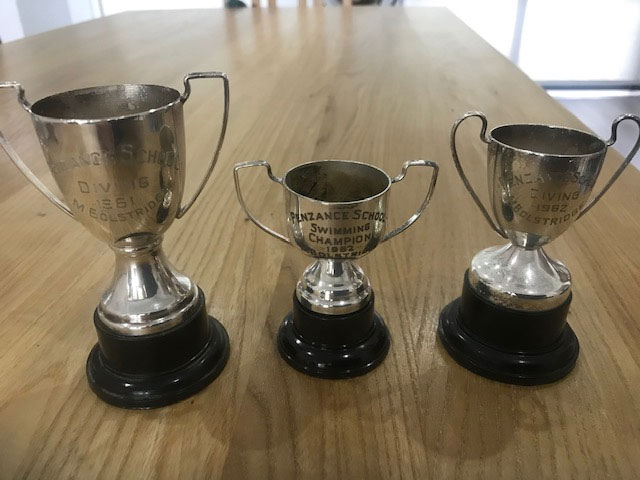 As can be seen from the trophy engraving, this was 1962, my last year at primary school.

I entered year 9 at Durban High School in 1963 at age 13, and swimming was a great team and individual sport at the school. We used to swim against other schools and you could represent your district and province at the SA Schools tournament, my first being in 1964 age 14. 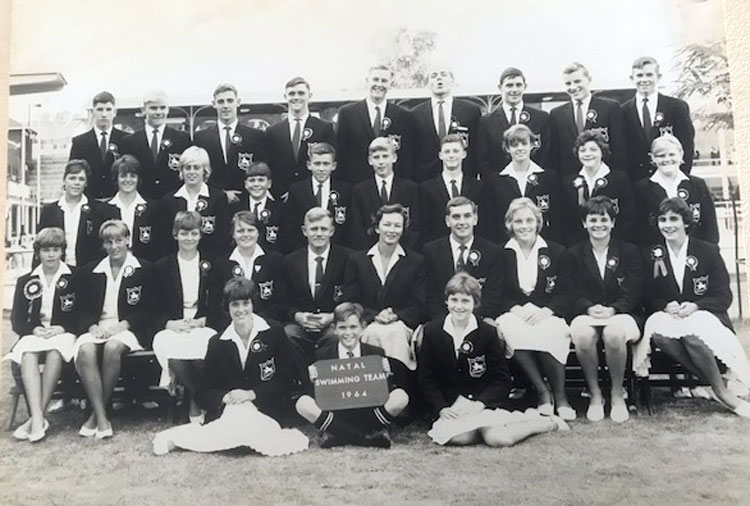 At this stage, our Tech ASC squad was training 5 days every week in the summer after school in the afternoons. We would cover around 3km, and in the long summer school vacations we would begin training twice daily, covering 4-6km which is very little compared to elite swimmers these days, but much of this distance was in 25m pools and done at pace ie quality rather than quantity. We were quite physically finished at the end of a session and would gather at someone’s house after to hang out, listen to music and relax. As there were no swim goggles in those days, we would suffer from red, irritated eyes from the strongly chlorinated water! The rest of the day was spent eating, and an afternoon nap before the afternoon session.

That was how we spent summer vacations, not very exciting but we were dedicated!

In the early 1960’s, there was a flourishing age group competition which was co-ordinated countrywide and sponsored by Speedo which was a young up-and-coming brand in those days. This was a great motivating influence for us youngsters, as we could see where we were ranked in the country in our respective age groups. I was doing already doing quite well in those days.

Then came the years of provincial and national representation and international competition between 1965 and 1968.

In 1965 at age 15, I was selected to represent my province, Natal against the visiting W.German team (was narrowly beaten into second by the W.German, Buettner - photo below was posed for the press!) 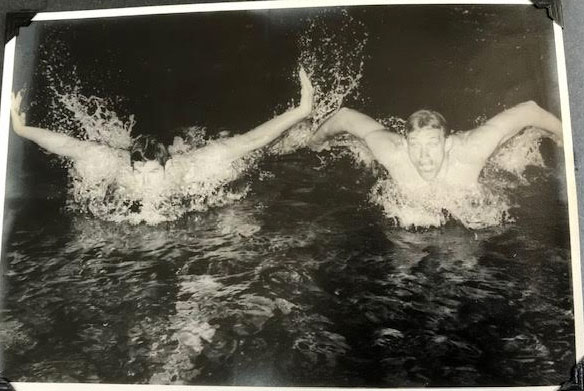 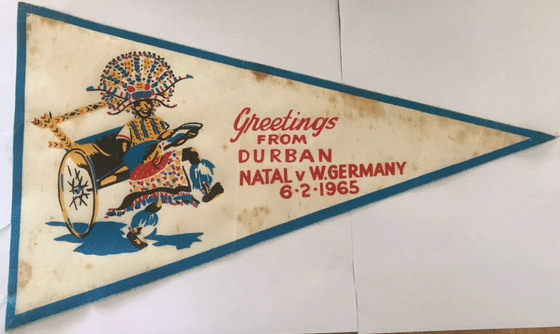 I was rapidly improving in my teen years and broke the senior records for butterfly several times and was often featured in the local sports columns…. 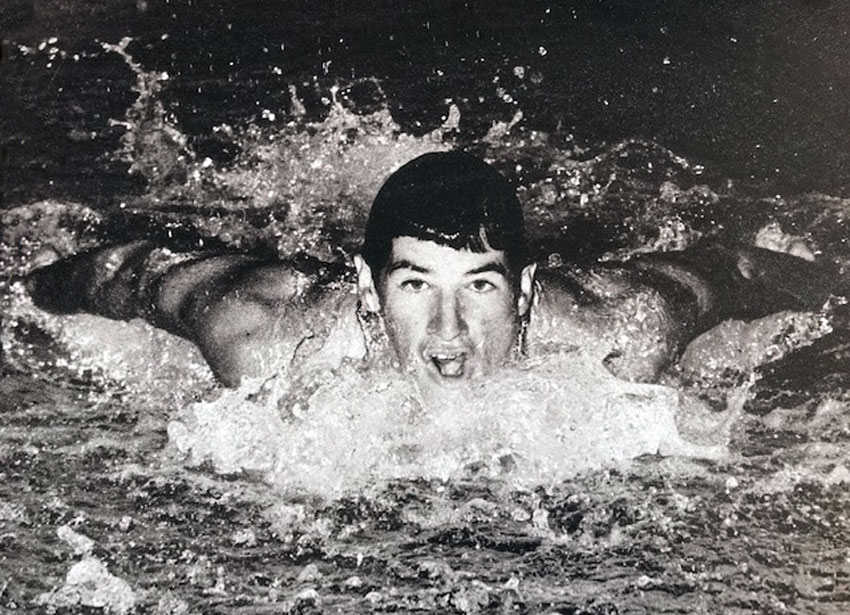 In the same year, 1965, I was selected as part of the Natal team to compete at the SA Nationals in Bulawayo, Rhodesia...my first nationals, I was so excited! This was the first time I had swum against the top swimmers in South Africa, as well as the top Rhodesian swimmers, who included a really talented butterfly swimmer John Keyter who was to be my nemesis in later years at nationals. I could not compete with John who was later swimming world-class times!

1966, my final year at high school, was also a good year for me as I set a new record in an inter-provincial competition. The press liked it... 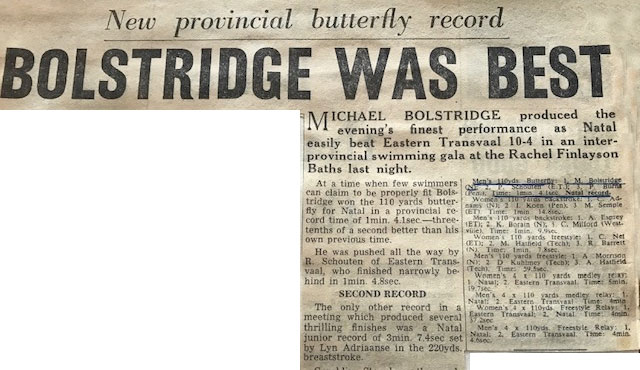 Fortunately for me, swimmers from Rhodesia although they competed in SA Nationals, could not represent South Africa, so in 1968 at the Bloemfontein Nationals, coming second to John didn’t affect my selection to the SA National team to swim in the Olympic Games in Mexico City. 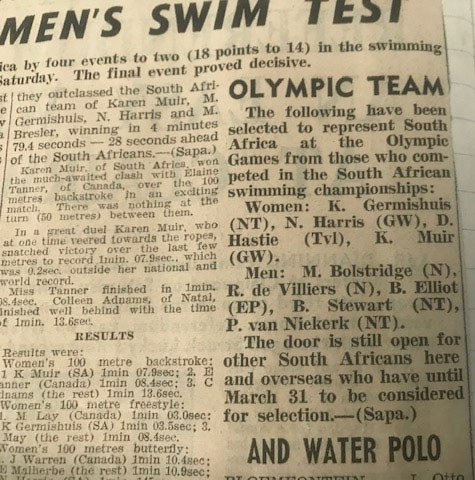 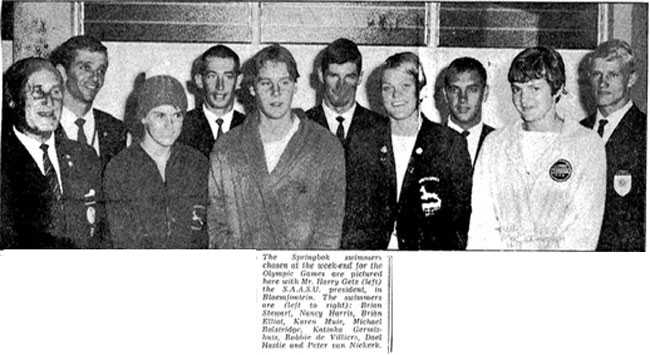 The only photo taken of the Springbok swim team chosen for the 1968 Olympics in Mexico City. 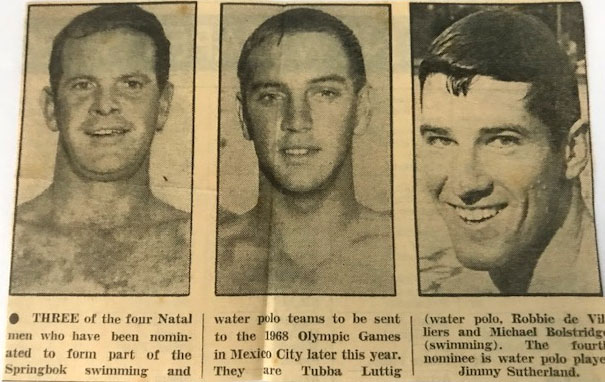 A month or so after the announcement, came the crushing news that SA had been banned from competing at the Olympics.

A men’s team was then chosen to tour Rhodesia and swim 3 “tests” against the Rhodesian men. We won all 3 tests, but I was always second to John Keyter! 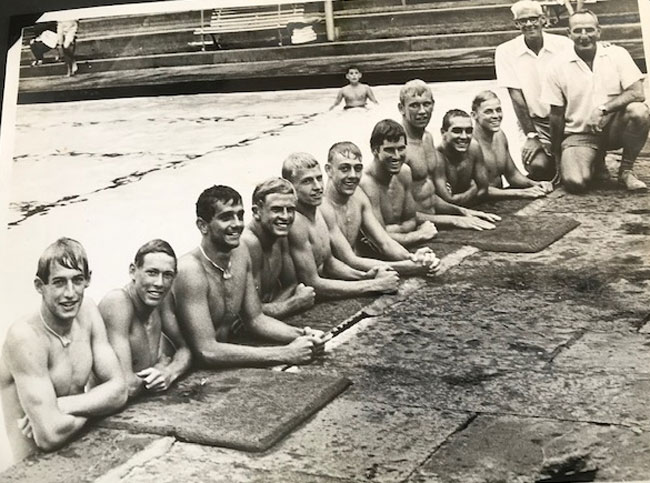 Photo of the Rhodesian and SA teams taken during a combined training session in the Les Brown pool in Salisbury summer 1968.

Another highlight of the trip was being formally presented to the then Prime Minister, Ian Smith! 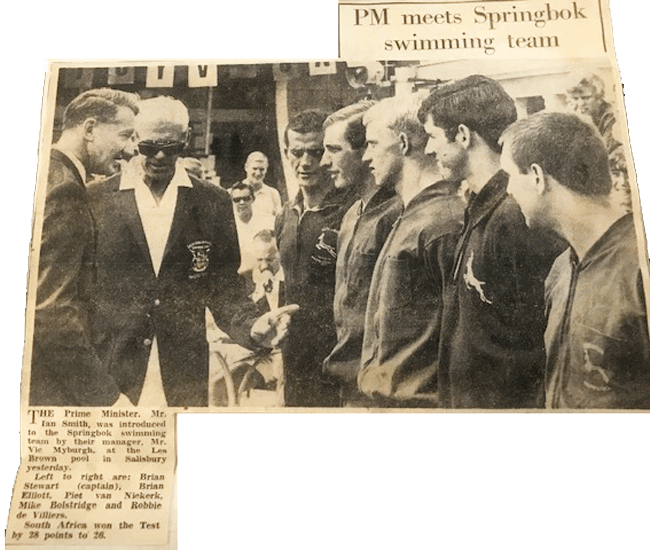 I then missed selection for a SA touring team to Europe as I was beaten into 3rd place at the Nationals in Cape Town in 1969 by John Keyter (1st) and Vernon Slovin (2nd) Vernon had been training in the US on a scholarship and was at the top of his game. 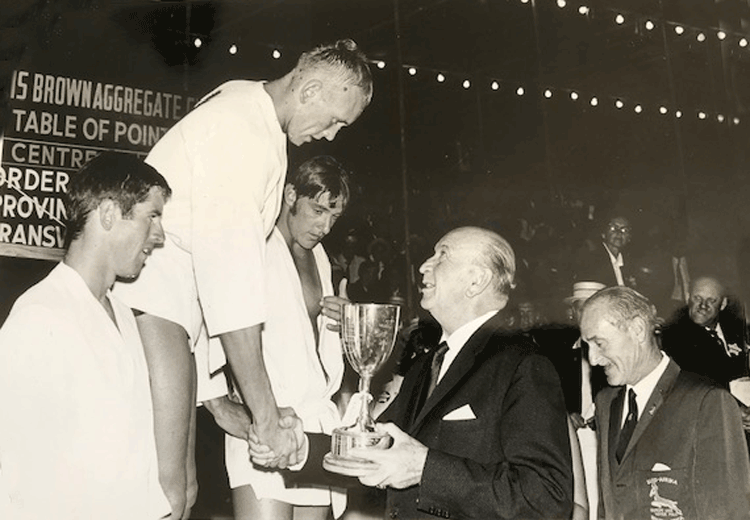 My last SA nationals was in 1970 (see team photo below) 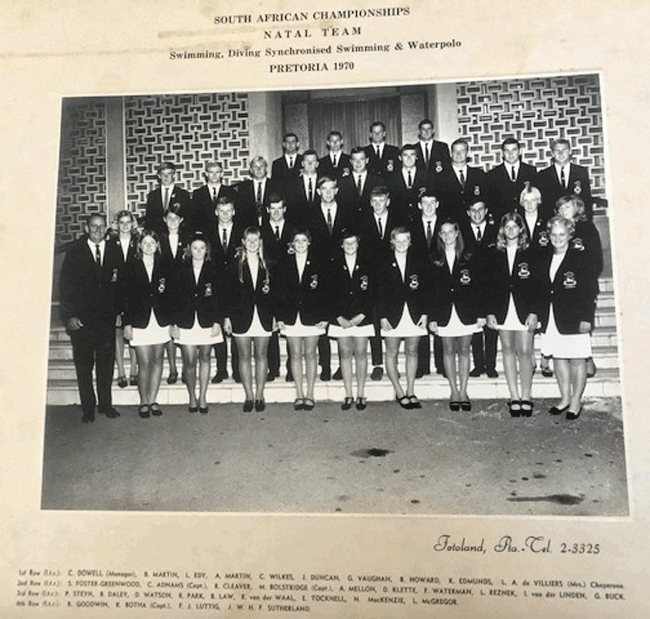 And from then, I started to question where does my swimming go from here.

I found myself at a crossroads, where my beloved coach, Alex Bulley was retiring, I was at university and immersed in my studies and although I made a few more teams to compete at SA Intervarsities Tournament, my focus on swimming was gradually replaced by other interests which became priorities.

In later years I became involved in road running together with my dear wife, Sue, and eventually finished 3 90km Comrades Marathons and several Two Oceans 56km ultra marathons as well as quite a few Olympic distances and ultra triathlons. 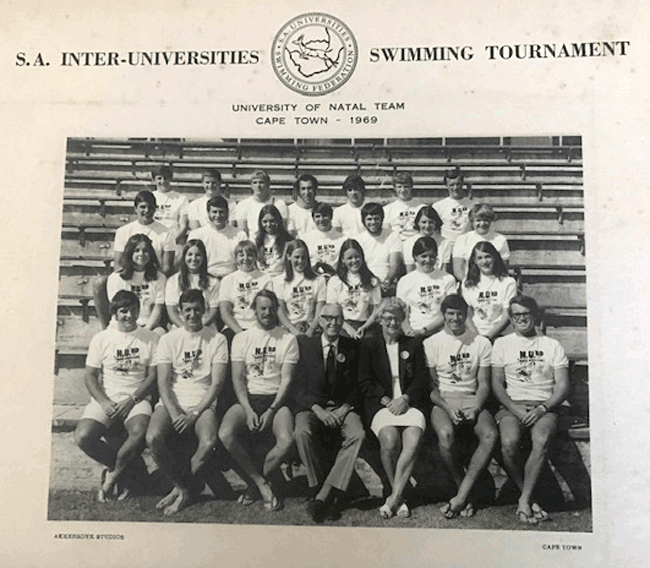 In conclusion, swimming has been the one consistent sporting thread throughout my life and I am blessed to be able to still enjoy training and competing in Masters swimming galas locally and nationally.